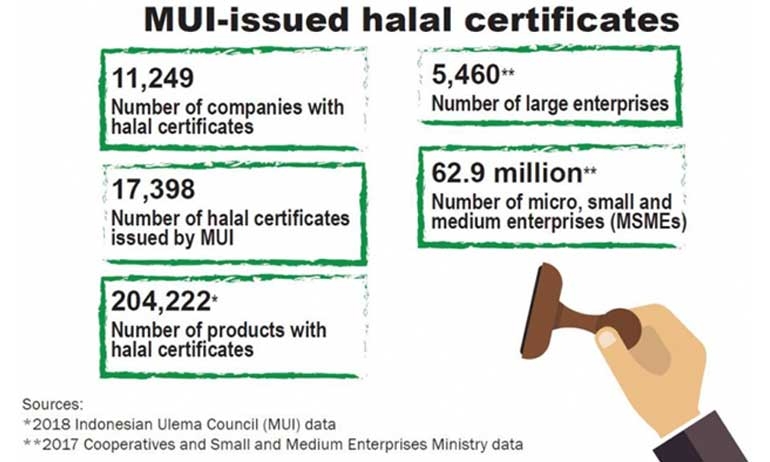 After about five years of preparation, the Halal Products Guarantee Law, which was passed by the House of Representatives in 2014, will take effect on Oct. 17. But many companies, especially those involved in the production of food and beverages, will unlikely be able to obtain the certificates due to high certification costs.

Indonesian Food and Beverage Association (GAPMMI) vice chairman Rachmat Hidayat said thousands of food and beverage producers would be unable to obtain the certificates not only as a result of high certification costs but also because of the complicated auditing process.

“We do not want anyone to restrict the sales of unlabeled products,” he said during a discussion in Jakarta on Wednesday. Rachmat said there were at least 1.6 million food and beverage producers from micro to big enterprises in the country that had yet to be certified.

He also doubted that the new government agency for halal certification, the Halal Certification Agency (BPJPH), could handle the influx of registrants. “If halal certification became a license to operate, I am worried that our micro and small enterprises would not be able to compete with the bigger producers who are able to pay for certification,” Rachmat said, adding that he preferred that halal labeling be made voluntary for businesses claiming to be providing halal goods and services.

Indonesian Franchising and Licensing Society (Wali) chairwoman Levita Supit Ginting also expressed her worry over the possibility of the circulation of fake halal certificates, as producers find a cheaper and faster way to obtain it. “I hope this law will not discourage people from becoming entrepreneurs,” she said.

BPJPH registration and certification center head Matsuki said the new tariff had yet to be announced but it would not burden micro, small and medium enterprises (MSMEs).

He added there would be "facilitation" for those who were unable to pay for halal certification, such as through a government-appointed halal product supervisor.

The 2014 law stipulates that all non-haram products and services must obtain halal certification.

The new rules will be implemented gradually, starting with food and beverage products.

Matsuki also said the government had extended the transition time for food and beverage producers by another five years, meaning that by 2024 all halal products must have a certificate.

“So, products without a halal label can still be sold and distributed until then,” he said, adding that street food stalls and catering services would also need to be certified.
Other sectors such as pharmaceuticals, cosmetics and services would be mandated in the next two years. However, the rule did not limit producers in these industries from registering their products, said Matsuki.

While Matsuki said his team targeted a total of 25,000 auditors to be ready by next year, Osmena said the agency needed more than that.

“The LPPOM MUI has around 1,500 auditors so the government needs to catch up on the targeted number. I think even 25,000 auditors will not be enough to accommodate all food and beverage products in the country,” she said.

Nonetheless, Matsuki said the law should be implemented as planned, citing that trial and error was needed to determine problem areas in the law.

“We do not have to be too idealistic. What is stipulated [in the law] will not be implemented as it is,” he said, adding that there would be room for improvement in the law.

Business owners can apply for halal certification through the BPJH’s website or directly at its office, which will temporarily be in local offices of the Religious Affairs Ministry.
The BPJPH will then delegate a halal product guarantor agency (LPH) to do the halal product assessment.

The results will be sent to the MUI, where it will be trialed to grant or deny products or services the halal status. If granted, registrants can take the certificate from the BPJPH.
Matsuri said that issuing halal certification could take up to 62 days or longer, depending on several aspects including the traceability of the food and beverage ingredients.

“However, it can be done in a week if the registrants fill out all the necessary documents in time,” he told the press. Regarding the new tariff, Matsuri said that it has yet to be decided.

He went on to say that registrants would have to pay the fee to each halal certification agency, namely the BPJPH, LPH, and MUI. “Payment cannot be made at once due to transparency reasons,” Matsuri said.