Ambassador of Italy to Indonesia 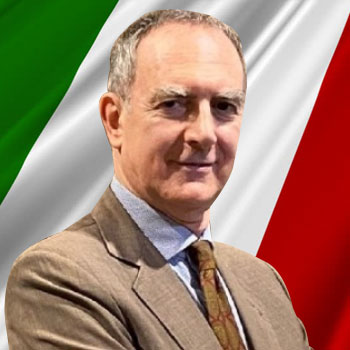 Born in Messina (Italy) on the 15th October 1959.
H.E. Benedetto Latteri Graduate from the University of Messina with a Degree in Law on 29th June 1983.

His Excellency started joined the Foreign Service on the 15th of February 1988 and attended the course for junior diplomats at the Diplomatic Institute of the Ministry of Foreign Affairs in Rome until the 15th of November 1988.

And on 2nd January 2014, His Excellency was promoted to the diplomatic rank of Minister Plenipotentiary, then Assigned to the direct Office of the Director-General of the Italian Country Promotion System on 19th September 2014.

On 22nd October 2014, His Excellency was placed as Coordinator of subject matters concerning the defense industry and control of exports of dual-use materials to counter the proliferation of arms of mass destruction.
His Excellency assigned to the direct office of the Director-General of Political and Security Affairs on 16th February 2017.

His Excellency was bestowed the honorific title “Official Knight of the Italian Republic (Cavaliere Ufficiale dell’Ordine del Merito della Repubblica ) in 2007 by the Italian Government.